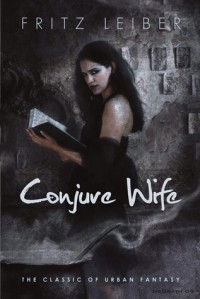 In my opinion this must have been a good novel at the time it was written. I imagined it had received good critics. But unfortunally reading it today I didn't felt connected to it.

First of all I think Leiber is an excelent writer. No doubt about it. But the plot suffered for what I call TimeLife. Maybe there is a term for it but I do not know it. My thoughts are these. Reading today in 2013, with hundreds of novels of urban fantasy avaiable this book fails to achieved it's goal. It's like most books written in the Gothic. Maybe they were good in those days but we are different.

The example I give is MacGyver. I really enjoy it. I still can watch it and like it. Or Knight Rider or something from those days in the 80's. But most people born after those tv's shows had long gone find them tedious when they have so much to see with action, adventure, life and so on.

Maybe I read "Conjure Wife" in the wrong time of my life. I enjoy a couple of gothic novels but others I find it boring that I can't even get to the middle of it.

Now for the book itself.

The protagonist is Norman Saylor, a professor of sociology in a College who starts wondering how did it get his sucess and his loveable wife (Tansy). One day he discovers that she is a practicioner of witchcraft and after a argument he says she must stop using that that she thinks is magic (which he doesn't believe).

After that problem solved several others appear almost at the same time with the culmination of his wife's disappearing. After this he tries to find rationality behind the witchcraft and even conjuring it.

Of course this was written in the 40's where how ideals were different from today. Men were sexist and thought of themselves the stronger gender and women were behind each spouse with devotion. Since this was written from Norman perspective he is a typical guy from the 40's. It's like saying Lovecraft was racist. Another times, another beliefs people. We can't judge them.

The premise behind the book it's simple. Behind each man is a woman but in this case behind each man is a powerful witch woman behind always fighting for the companions. And this is why woman were always relegated, persecuted and even killed. Because Men fear Women.

Either way. This is not the birth for Urban Fantasy but I can see why it's labelled that way. This is a psychological literature with mild influences of horror. Neither was it scary or had gore in it.

Why should you read?
Don't expect what the covers says but as I said before it's a Leiber book so if you like other things he wrote you will enjoy this one.
Tweet
3449 BOOKS